I know what you are thinking. “Ha ha, yeah right, who goes on a mission trip to Hawaii?” But before you pass judgment too quickly, think about it for a moment. Here is a place where every week, thousands of people come from all over the world to relax and hang out in paradise. In Honolulu alone, not only are there 850,000 people who need Jesus Christ, but there are thousands more vacationers who spend all day wandering around the Waikiki strip. Somebody has to be called to this mission field!
I am blessed to have a brother-in-law who, like me, has an incredible burden for the lost. He and his family are involved in YWAM, and have been based in Hawaii for about a year. He has been making the most of his time as a street evangelist and has been sharing his exploits with me. Last fall, he told me that he thought he might be able to get my wife and I free housing on the YWAM base if we came to Hawaii to preach with him. We planned out a trip for Feb 2011, and so the adventure begins…

We wasted no time in ge 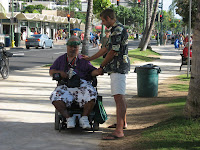 tting started once we arrived. After an evening service on the base, Joel and I, along with our wives, took a team of YWAMers down to Waikiki for a night of evangelism. We passed out the ammunition, (that is street preacher’s code for ‘tracts’) and spread out along the waterfront. One young man even carried a massive, 10′ cross down the sidewalk so there would be no mistake in his intentions, should someone want to have a conversation. The evening was full of great one-to-ones, mass tracting, and even some open air preaching.
I have preached open air more times than I can remember, with amplification, but I never tried preaching from a real, bona fide bullhorn. Tonight, that was about to change. To be honest, just the thought of it sounds abrasive. Joel gave me the amount of encouragement I needed to give it a try. As I watched a young man bravely thunder out the gospel from his corner, I tried to envision how I could do it without sounding irritating. He finished and was taking a break, so I asked if I could take a turn, and away I went. I had barely gotten started when I looked down to find a police officer at my side. I thought for sure the show was over. But rather than shutting us down, he explained that they had received complaints about the preaching being too loud, but in his estimation it was just fine, so he allowed us to continue! They left and did not return. Praise the Lord! 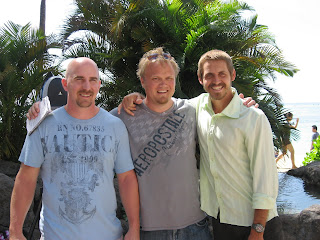 The team re-grouped at the appointed time, shared testimonies and prayed before heading back. Our first day in Hawaii was starting off on the right foot, but this was just the beginning.

The core team was Joel and his wife Crystal, me and my lovely wife Beth, and a fired up young man named Troy Krill. We returned to the strip daily to shine the light of the gospel, and each day was filled with its own stories of great encounters and testimonies of the hand of God. It was really not that hard to gather a crowd to preach to in a place like this. 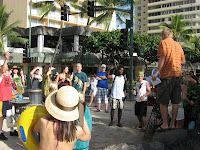 tand and listen to the gospel if you can manage a crowd well. Most people were very open to what we were saying and doing, with a few exceptions. We certainly had our hecklers. One old man walked boldly up to me as I was preaching and cussed me out. Another time, as Troy was preaching, a middle aged man in a business suit came up to Joel and began antagonizing him, trying to get him to fight! I got the whole thing on video. Another night, while preaching at a certain intersection, we gradually became surrounded by prostitutes. Apparently we had chosen their corner. Needless to say they got plenty of gospel preaching that night.

Most people, however, as I said, were open to the gospel, and would stand and 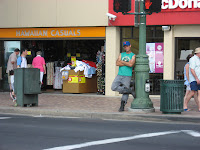 listen at least for a moment. Some would listen intently as the young man pictured. He stood there and listened for almost a half hour. One young woman stopped to listen, even as her friends laughed and scoffed and walked away. I could see that she was really impacted by the message because as she listened, she began literally openly weeping, so I kept on preaching as long as I could, giving her more and more of the love of God. God brought her to the right place that day so He could speak to her through us.

On Valentines Day, my wife and I went out to a nice place for dinner. Of course, there was a waiting list to be seated. As we waited for our name to be called, another couple walked in. Immediately I received a quickening in my spirit to share the gospel with them, but I didnt know how long I would have before we were seated. My wife went to the restroom and I pondered how I could brooch the subject of the gospel. Just then, the hostess approached me and said our table was ready. “Will you give our table to this couple?” I asked. They all looked shocked. She said she wouldnt mind waiting for my wife to return, but I insisted. The couple couldnt believe it. I was surprised that they made such a big deal out of it. After all, it was just a table, and another would be along soon enough. So, eventually we got seated, right next to the couple I wanted to witness to. I struggled in my mind the entire time to find a way to speak to them, but found none. I paid the bill and left in defeat. As we were descending the staircase that led to the restaurant, I turned around and found myself face to face with the man and woman I was convinced I needed to speak to, so immediately I began chatting it up with them. Naturally, they were very friendly with us after what had happened earlier. After finding out some background information, I swung the conversation to spiritual things and things got really interesting. I was amazed at their openness and the questions that they asked. It really was a divine appointment and hopefully a moment of change for the both of them. A little kindness can go a long way in opening people up. What good things are you doing for strangers that may give you a doorway into their lives? 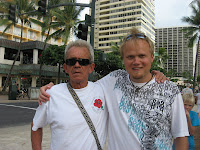 One day, as Joel was preaching, a man approached him enthusiastically and said that he had been putting this off for too long, but now he was ready to commit his life to Christ. He asked to be baptized right on the spot. So, Joel took him right down to the water, and in front of hundreds of people on the beach, baptized him in the ocean on Waikiki. He is the older gentleman pictured with Joel.

There are many, many inspiring testimonies from our brief time in Hawaii. It is amazing how powerful the gospel can be when we purpose in our hearts to obey the command of Jesus to preach the gospel to every creature. He is always faithful to fill us with his Spirit and open doors of opportunity when we ask him to. How are you impacting your community or the people around you for the kingdom of God? What kind of positive influence for Jesus Christ are you having on those around you? Ask the Lord to make your mouth into an instrument of righteousness. Ask him to give you a compassion and a burden for those who are perishing. Ask him to use you in the battle for the souls of the lost. You will be surprised at how often you find yourself being used in mighty ways.

Follow the link to watch an open air preaching session from Waikiki. http://www.youtube.com/watch?v=AvzCqfInrWw

See you on the streets!